Article by: Stormtank, January 04, 2016
Back to Knowledge Center
Prev Article
Next Article
Share this Article: 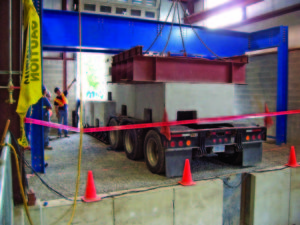 As with most stormwater management topics, this explanation has both a simple and a detailed answer.

The simple answer is that we use the HS-25 classification to rate the strength of a system so that we know where it can be used and how much loading it will be able to handle. In that respect, HS-25 is an interpretation of the American Association of State Highway and Transportation Officials’ (AASHTO) HL93 truck load and is defined as being 20% higher than the HS-20 design truck load.

AASHTO HL93 is the theoretical live load model applied in the AASHTO bridge analysis standards for Load and Resistance Factor Design (LRFD). The LRFD for bridge design is the broader standard utilized for both bridge and subsurface system analysis. This methodology is based on the principle of a resistance factor (a number less than zero) that is calculated by comparing the theoretical load with safety factors to the resistance, or tested load.

This theoretical live load (HL93), defined as the “Design Truck”, is an HS-20 load or 16,000 lbs. applied to a 10” x 20” surface load pad. This is one of the factors included in the standard, in addition to dead load (soil weight), surcharge loads, and all applicable load/safety factors. These safety factors include dynamic load allowance (impact factor), multiple presence factor (oversized load), and load factors applied to the dead load and live load.

Based on the HL93 live load, here are two examples of system loading capabilities –

A single tandem HS-20 load applied to the surface would equate to the following:

A single tandem HS-25 load applied to the surface would equate to the following:

Based upon the above calculations and full-scale installation test results with the minimum required 24” stone cover, you want to see a resistance factor less than 1 because this equates to a factor of safety comparative to a fully factored load.